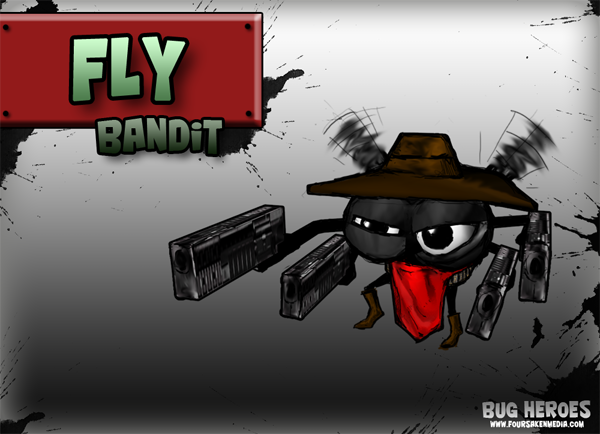 Dev Description: "With this huge update nearing submission, its time to unveil the next hero -- The Fly Bandit! This scoundrel is not your typical hero, fighting for nothing more then money and loot. He is very fast and takes care of business with four pistols. Hopelessly addicted to gambling, Fly has a lot of luck-based abilities and ones that cost money, but also some that earn him extra side cash to make up for those expenditures. Essentially, Fly is only as powerful as the money you keep spending on him!"

Description: Fly comes with the DLC "Death From Above" and has Mosquito for his alternate. He used to be and probably still is the most used hero because of his speed and money making options. He also combines very well with Termite and has the huge advantage of being immune to slug slime and other ground traps. Most abilities are luck-based or used to gain extra money. His speed and ranged attacks allow him to keep out of danger while picking off enemies and Fly is just a great way to use your money mid to late game. I have heard, though, that some people are using Ant's great abilities instead to quickly complete quests, eaning extra money too an also extra points.

Weapon: Fly wields four pistols. They all shoot simultaneously, yet have horrible aim. This means with every round, four bullets are fired which rarely stay in the desired direction. However, they can provide some reasonable crowd control and go great against the fast, weak melee enemies like Ant Warriors.

The Pistols can be upgraded to Big Pistols and then Bigger Pistols. Each upgrade increases nothing but damage, which usually doesn't help as much as it costs.

Skills: Fly comes assorted with some very unique abilities not seen in any other hero. However, none of them help with offense and none will do very much with durability. He has Health (increases max by 20 and heals by 40), Speed, Chance (increases chance that an ability will instantly recharge after use) and Theft (increases chance of gaining extra money from kills).

Recommended Level-Up Skills: Speed and Theft are of equal value (unless you have another really fast hero on the team). Upgrade them first, then choose between Chance and Health. Chance if you're using abilities that don't cost money (otherwise you'll need to pay money again in a very short time). Health if you think Fly is dying too quickly.

This article is a stub. You can help Bug Heroes Wiki by expanding it.

Pick Pocket: When activated, fly gains 15 extra gold per enemy. Very useful for gaining tons of money when you see lots of small enemies. It also helps for termite's turrets. However, when you upgrade all your turrets and bought everything that you need, it's useless. 800$, 120 sec cooldown.

Barter: When used, you sell your food that you're carrying. Gives you max of 300$. Useful when there's too much food on the ground and you're full. 800$, 100 sec cooldown.

Quick Draw: When used, it slows down time(like spider's superior assassin), gives you a bit damage bonus, and most importantly, Fly pierces all armor. Very useful for taking down armored enemies or killing things faster, or dodging. It also has short cooldown, but like it's name, it only effects you for a short period of time. Still recommended. $800, 25 sec cooldown.

Drunkard: Use in battle to become drunk, which doubles damage and reduces damage by half. But your movement will be reserved(when you push the movement button to left, you go right), so you have to be careful! It can be really useful to kill some bugs as it doubles damage. But you have to be careful in high rounds, because you can go to the wrong place and get cornered. $700, 50 sec cooldown.

Scroundel: Use in battle to cause Fly to do more damage while shooting a stunned enemy. It also gives fly a small chance to stun an enemy. $800, 80 sec cooldown.

Spinning Shot: Use in battle to shoot a bunch of defensive bullets in all directions, knocking back and stunning enemies if they are hit. It is good if you are surrounded by a bunch of enemies or little bugs since it gives you some "elbow room," but for powerful bugs, not really. It isn't very strong. $600, 30 sec cooldown.

Roulette: Use to shoot a target with a shot that does random damage. Damage ranging from very weak to extremely powerful. $800, 70 sec cooldown.

Recommended Advanced Loadout: Quick Draw (lasts for a very short amount of time but has a quick cooldown. Can get fly out of tough situations), Drunkard (with good skill, you could still control Fly with ease. Can easily kill enemies), Scoundrel (Once again, gets Fly out of bad situations. Use it with Zappers for more stunned enemie), Gamble (anything it does is good) and Gnat Banditoes (they give extra damage and crowd control).

If you have a stragety for this hero, please write it down. Don't forget to sign off your username.

Add a photo to this gallery
Retrieved from "https://bugheroes.fandom.com/wiki/Fly?oldid=6400"
Community content is available under CC-BY-SA unless otherwise noted.